Learn German with Youtube - My Top 5 Youtube Channels for Learning German in 2021 Today I'm going to show you my favorite Youtubers that you can use to take your German to the next level! My own Youtube channel "EasyDeutsch - German Grammar Simply Explained" mit über with over 100 videos on German grammar is running out of competition here, because I want to introduce you to my own favorites for learning German with Youtube. 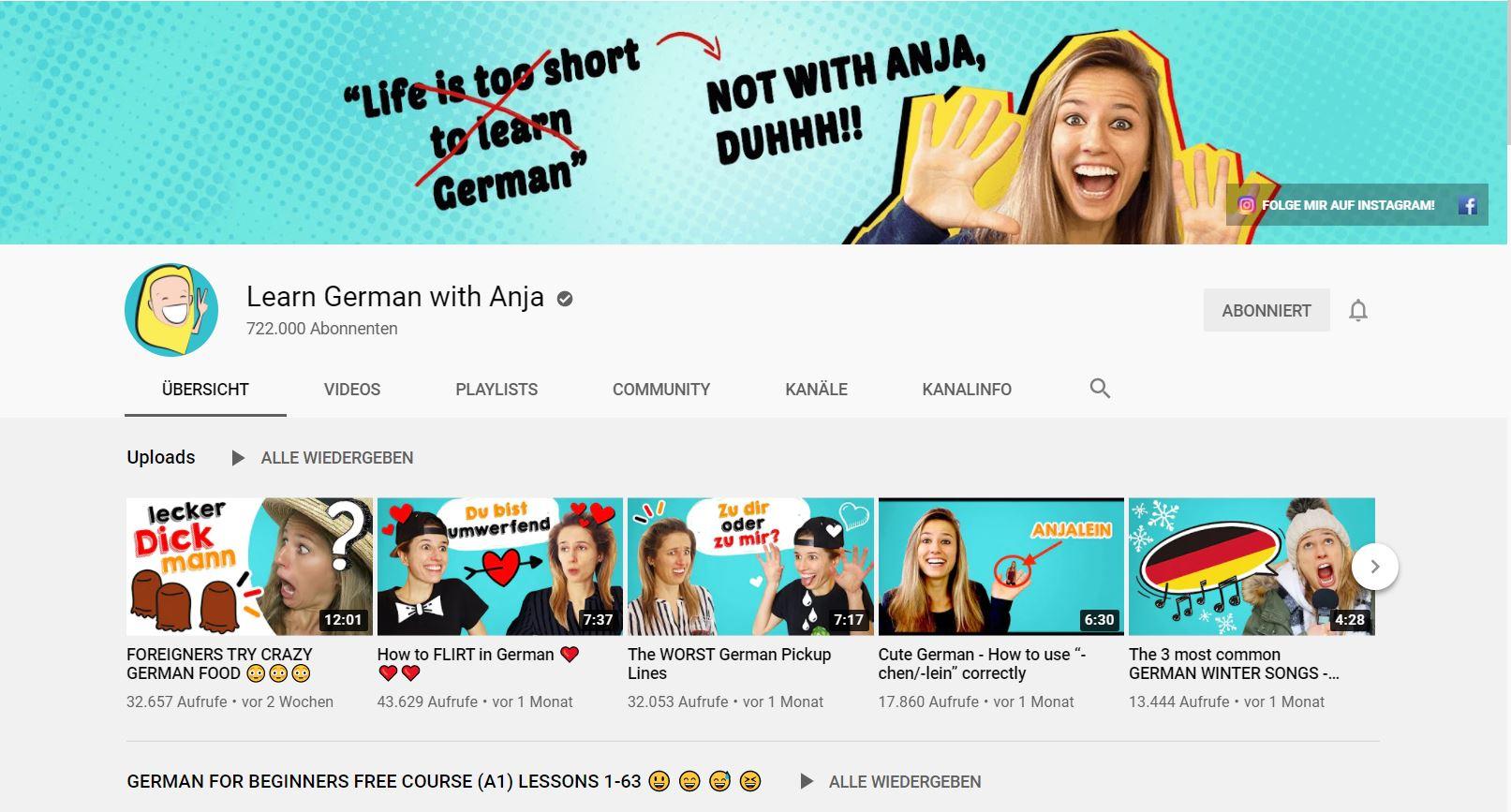 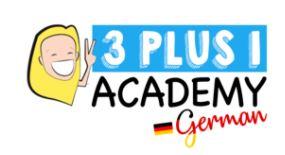 Anja is one of the "old hands" on YouTube. For more than seven years, she has been creating great language learning videos for everyone who wants to learn German with YouTube. The focus is on lessons for English speakers. In most videos, she explains or shows you something and then translates the most important vocabulary or phrases into English.

The special thing about Anja's approach is learning through short stories. Thanks to Anja, you can easily master all everyday situations.

You will learn, among other things, ...

All videos have English subtitles, so you can easily follow Anja. If you speak English, you can follow Anja's Videos even with minimal basic knowledge. If your English is very poor, but you can already understand German, then her funny and entertaining videos will help you as well.

Premium: In addition to the free German training, you can also buy Ebooks or complete German courses at the 3plus1 German Academy in which Anja Deutsch teaches you German using her proven 3plus1 method. Fun, entertainment and success guaranteed! 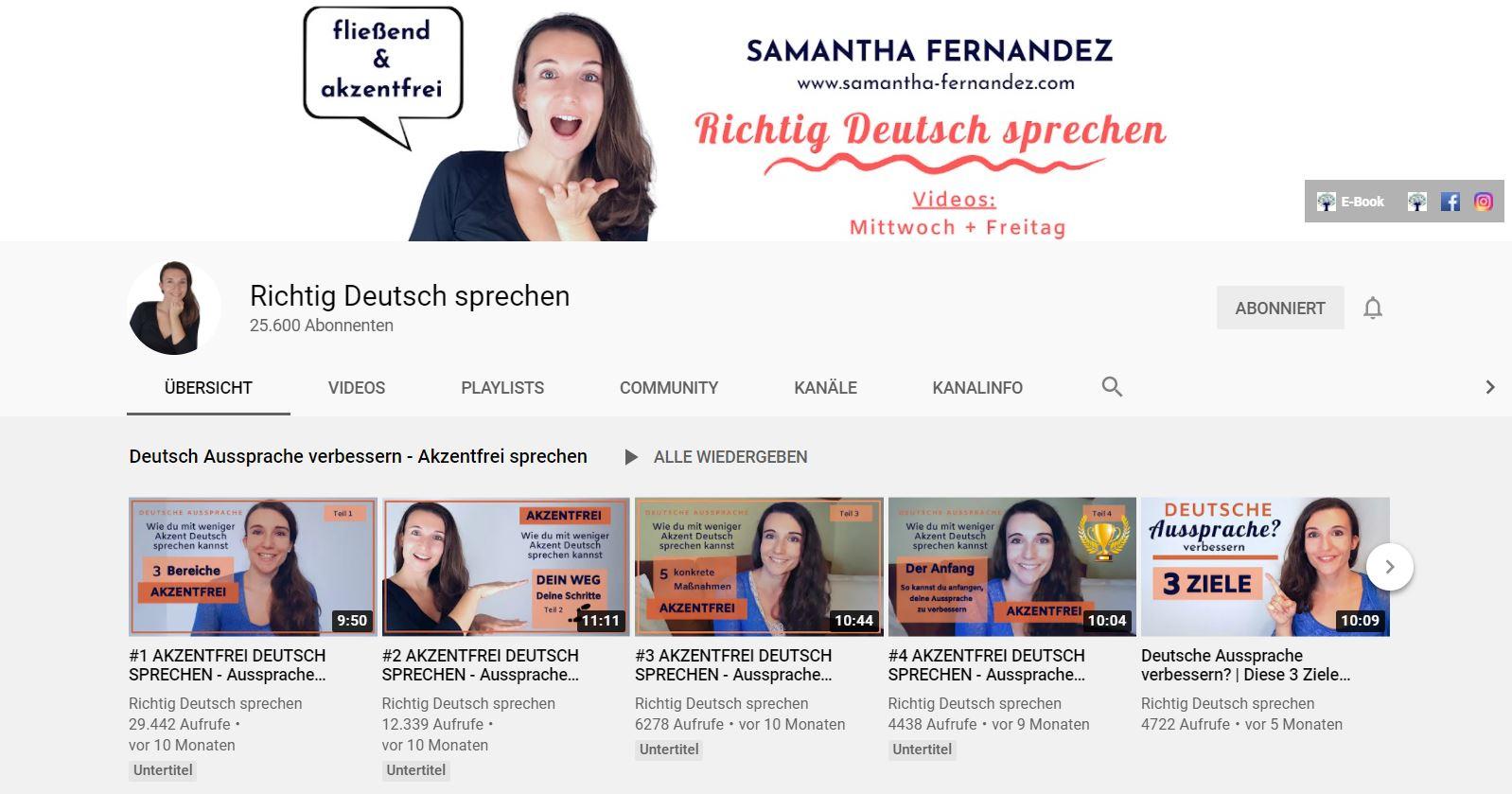 Samantha is not only a German teacher but also a certified speech therapist. Samantha's focus is on speaking and as a speech therapist she naturally places great emphasis on pronunciation and intonation.

Samantha's lessons serve as ideal preparation for the oral part of the German exams. The videos on her Youtube channel "Richtig Deutsch sprechen" are suitable for learners of levels B1 to C2.

If you don't have time for Samantha's private lessons, I can recommend her new audio book: Pronunciation Basics - Speaking German Accent-Free in addition to her Youtube-Kanal.

Perfect as a supplement to learning German with Youtube

Free email grammar course with explanations as video and/or PDF and exercises with solutions. Two grammar topics per week - always on Tuesdays and Thursdays.

Sign up now for the free grammar course from EasyDeutsch! 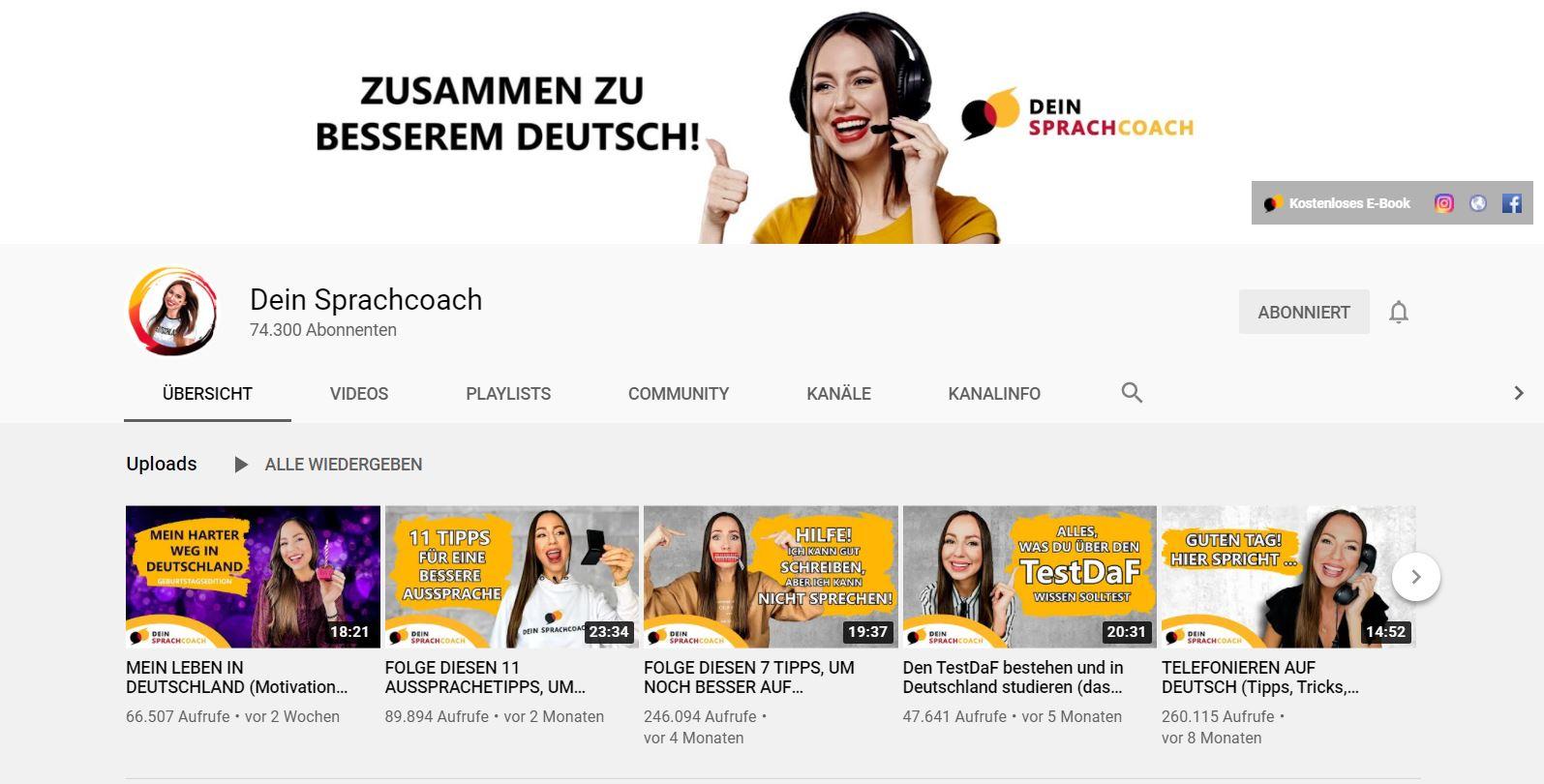 What it's like to have to learn German and where the difficulties lie - Maria knows all this not just from hearsay. She only moved to Germany from Russia at the age of 22 and had to learn German herself. This makes Maria a particularly great and empathetic teacher, because she can easily put herself in her students' shoes.

On her YouTube channel "Dein Sprachcoach" Maria also gives lots of great advice about German exams and also talks about her life in Germany. The videos are totally motivating and just perfect for anyone who hasn't lived in Germany that long and occasionally struggles with certain German idiosyncrasies. Maria also has an account on Instagram, where she posts vocabulary and stories from her life almost daily.

Maria speaks only in German and without subtitles. That's why her videos are perfect if you already have at least a basic knowledge of German. My recommendation: from level B1 or B2.

Free:  On Maria's Website you can download for free her Ebook with 10 secret tips that helped Maria learn German.

Premium: With her Crash Course for only 37€ Maria wants to help as many German learners in this world as possible to get rid of their accent, sound "more German" and be even more successful!

Patrick regularly publishes new videos on the German language. These include videos on grammar, vocabulary and pronunciation. He also gives helpful tips on learning German and preparing for exams! At the end of his videos there is often an exercise or a hint where & how you can improve your German language skills! On his website sprachekulturkommunikation.com you can also find a lot of additional content and exercises as well as individual, group and self-learning courses.

Free:  On Patrick's website sprachekulturkommunikation.com you will find countless articles on grammar, pronunciation, listening comprehension, exercises and much more.

Premium: You can become a Youtube channel member and for 2,99€ or 4,99€ per month you get different benefits, like live chats and discount codes for Patrick's German courses.

Behind this YouTube channel for learning German is a whole team from Berlin. Easy German is not only about the German language, but also about life in Germany and German culture. Founders Cari and Janusz launched the project in 2005. In the meantime, Easy German has become a large community. The special thing about this channel is that Cari and Janusz go out on the street and interview people spontaneously. This way, learners can hear what real spoken German sounds like. Thanks to the English subtitles, you can follow along even if you don't know German very well yet. The prerequisite is, of course, that you understand English. On the Easy German website you'll find lots of great learning aids such as a vocabulary trainer.

Easy German produces content in many different countries, including Poland, Russia, Korea and Mexico. The format has proved so popular that there are now also "Easy Italian" and "Easy Turkish".

Free:  There is also a podcast and an app called "Seedlang". The podcast is free and there is a free and a premium version of the app.

Premium: Instead of buying content like books or courses, you can become a member of the community. Easy German organizes regular meetings for all community members so that they can get to know each other and the people behind Easy German. In addition, depending on the membership, there is also an app with exercises and a podcast for members.

Deutsche Welle is the foreign channel of the public broadcasters (ARD, ZDF, ...). It is primarily aimed at foreigners who are interested in Germany and the German language. Therefore, it is only logical that you can learn German with Deutsche Welle on YouTube - and quite differently than with the other YouTube channels.

Deutsche Welle tells Nico's story on its Youtube channel. Nico comes from Spain and lands at the airport in Germany. However, he doesn't know any German. The material is suitable from level A1 and introduces you gently and above all with a lot of humor to the German language.

Deutsche Welle even has a telenovela for learners of German at level B1 and above. Brazilian Jojo has moved to Cologne to study. Three seasons report on Jojo's exciting new life in Germany.

In addition, there are video series on many different topics. It is especially good that the video title always mentions the language level (A1, A2 , B1, ...).

Free: On the website of Deutsche Welle there are additional materials, such as exercises and grammar explanations. Often you will also find the link to suitable exercises under the video in the description. 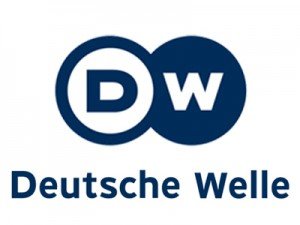 Premium: No premium content. Deutsche Welle is financed by taxes and the GEZ. 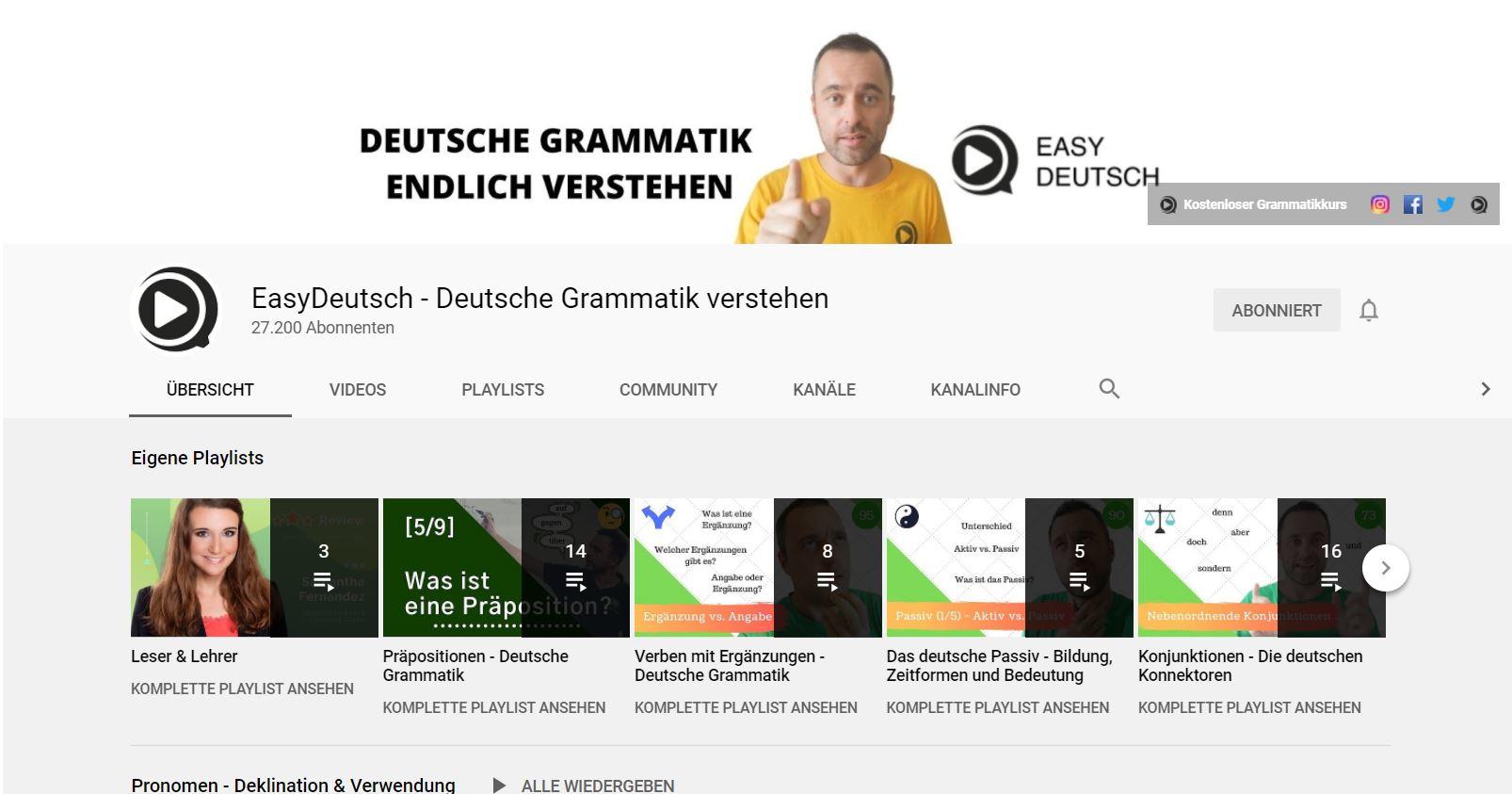 On YouTube I explain you in over 100 video all topics of German grammar on the levels A1-B2. My explanations always focus on the 95% of words that correspond to the general rules. I mention the most important exceptions, but I don't focus on a "Perfect" explanation with all exceptions, because then most students don't understand the 95% anymore.

My explanations are therefore always written from the student's point of view and have already led to an AHA effect with many German learners. The student's understanding is always the focus.

Free:  On my website you will find dozens of pages with explanations of German grammar. In addition, you can also sign up for my Free Grammar Course. Here you will get a new complete grammar unit (explanations as video lessons or PDF + exercises as PDF download) every Tuesday and Thursday. If you are a German teacher, these units are also perfect as homework for your students.

Premium: In my store you can buy single ebooks or ebook packages with a big discount. (To the EasyDeutsch Shop) Some of the ebooks are also available as printed books. You can find them on Amazon: To the printed books.

To EasyDeutsch Youtube channel
Go to the Free Grammar Course

What is your favorite YouTube channel for learning German?

Do you agree with my top 5? Let me know in the comments!

Who is writing here?

German is simple! Is only often explained too complicated! At school I never understood what my teachers wanted from me with Dative, Accusative & Co. When I started teaching German in Brazil in 2013, I had to teach myself everything! My knowledge of German grammar was zero! I learned everything by self-study and found out that it's eigtl. not difficult at all and (almost) everything follows clear, structured rules! My mission is to show and prove to all who have not yet recognized these structures that German is simple, only often explained too complicated!

Buy 5 Ebooks together now and get the other 5 for free!

Perfect as homework or for self-learners!

The best apps for learning German

Learn to speak with Lucas